All you need to know about Yamuna Expressway

The Yamuna Expressway was earlier referred to as the Taj Expressway. The project was started by the Government of Uttar Pradesh to improve connectivity between the National Capital Region and Agra. The 165 Kms long Yamuna Expressway Highway has reduced the travel time between New Delhi and Agra to just two and a half hours from four hours earlier. The expressway is India's largest six lanes controlled expressway constructed at a total cost of US $1.9 Billion. The Yamuna Expressway Industrial Development Authority (YEIDA) had acquired over 1,500 hectares of land from 335 villages across Gautama Budh Nagar, Bulandshahar, Aligarh, Mahamaya Nagar (Hathras), Mathura and Agra districts for the project.

The Yamuna Expressway project was proposed by the Mayavati government in 2007 and was completed in 2012 at a cost of US $1.9 billion two years ahead of its original target completion date by the Jaypee Group. The Yamuna Expressway was inaugurated on 9 August 2012 by Chief Minister Akhilesh Yadav. The expressway connects greater Noida with the NH2 towards Agra and Kanpur. The aim of the Yamuna expressway Highway is to connect the main commercial centers and townships on the eastern side of Yamuna and ensure the development of all adjoining areas. It has toll plazas with 16 gates on each side and has tie ups with two major hospitals with facility for air ambulance in case of emergencies. It is covered with CCTV cameras and has fuel stations, food courts, ATM's and public convenience for making the drive comfortable for you and your family. It has an emergency call box connected to the control room every two kilometers on either side of the road in case of emergencies. Yamuna Expressway has 6 lanes and has reduced the travel time from New Delhi to Agra by 50%. Light vehicles can travel up to a speed of 100km/h, whereas; heavy vehicles can travel at a speed of 60km/h on the Yamuna Expressway. Slow moving vehicles like push carts and bullock carts are not allowed on the expressway. 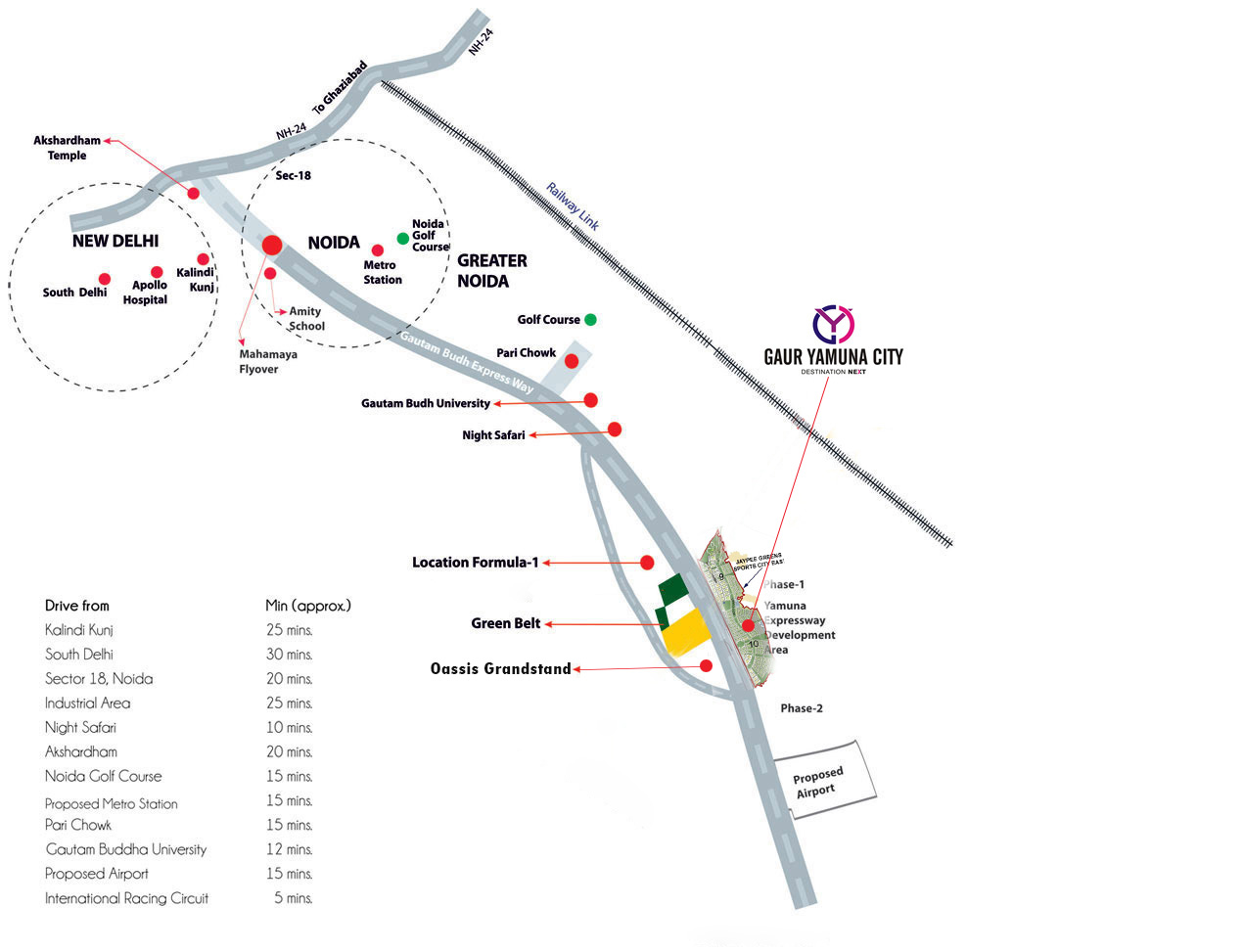 The Yamuna Expressway connects with the NH2 towards Agra and Kanpur.

Yamuna Expressway provides an ideal investment opportunity as it has the latest infrastructure and is well connected to Delhi, Noida and other parts of Delhi. Yamuna Expressway Plots by leading developers include Gaur Yamuna City 32nd Park View Plots and Supertech coast country are expected to give excellent returns over the coming years.

Gaur Yamuna City 32nd Park View Plots are residential plots on the Yamuna Expressway plots sizes ranging from 159 and 259 Sq yards. Located in a prime location the complex features a racing track, night safari and an upcoming cricket stadium. The Yamuna Expressway plots come with all amenities including 24 * 7 security, water and power backup. For health and fitness fanatics the complex has a swimming pool, badminton court, club house, gymnasium and garden. It is close to the proposed metro stations as well as right next to the Yamuna Expressway, making it a value for money property which will see excellent capital appreciation in the next 3-4 years. The project will be a part of the Gaur Yamuna City spread over 100 acres and will come with all amenities that are needed for comfortable living.

Renowned developer Supertech is building Supertech coast country right next to the Yamuna Expressway Highway. The township has premium plots of 500 sq yards that come with all modern amenities. It has schools, restaurant, hospitals, bus stands, bank, ATM's, park and shopping area all within the complex giving you access to all daily amenities. You can enjoy panoramic views of the F1 circuit from the comfort of your home and that gives you a thrilling experience right on your doorstep or enjoy watching wild animals under the moon in the proposed India's first nocturnal zoo. For entertainment purposes, this is a movie theater, world class Gym so you will never have to step out of the township.

Oasis Grandstand is a modern integrated township located right on the main Expressway and is in the close vicinity to the Formula 1 Circuit. It project is spread over 8 acres and has 11 towers with over 1284 residential units in 1 BHK, 2 BHK, 3 BHK formats ranging from 695 sq. Ft. – 1795 sq. Ft. Areas. The luxurious apartments are marked with plush interiors. For the fitness lovers, there will be a swimming pool, tennis court, gymnasium, basketball court as well as a kid's play area. The civil infrastructure will boast of leading schools, universities, hospitals and shopping centers in close vicinity. The apartments are also in close proximity to the proposed night safari and en route to the proposed Aviation hub. Oasis Grandstand Noida offers residential as well as commercial spaces for high end retail shops as well as offices. The apartments are well connected to South Delhi, Noida & Greater Noida making it one of the most sought after upcoming residential developments on the Yamuna Expressway.

Developed by Gaursons, Gaur Yamuna City is a 240 acre township located right on the Yamuna Expressway. It has over 1500 apartments ranging from 2BHK, 3BHK and 4 BHK as well as plots ranging from 120 sq yards, 150 sq yards and 200 sq yards. The project comes with all modern amenities including a 2,50, 000 sq. Ft. High-end, luxurious club with a well-equipped high-end gymnasium, a football field, cycle tracks, an Olympic-size indoor swimming pool, badminton courts, squash courts, tennis courts, basketball courts, a large skating ring as well as a Yoga / aerobics hall. The complex will offer additional facilities including a separate ladies and gent’s salon, which will come with a sauna and steam bath as well as a changing room with lockers.

The township is advantageously located in India' fastest-growing professional hubs just opposite to the Buddha International Circuit (BIC). The mini township is in a prime location right next to the Formula 1 Track, with night safari and upcoming cricket stadium. It is India's first and only integrated sports city and is well connected to the heart of Greater Noida, Noida and Delhi. Designed for peaceful living the complex has open green spaces with beautiful landscaped gardens. The apartments are priced starting from INR 25 lacs, while you can buy a fully furnished villa starting at 66 lacs.

With the proposed Taj International Airport coming up in Greater Noida, prices of projects on the Yamuna Expressway are expected to escalate even further. An international airport in the area will help the economy grow and attract significant foreign investments and will be developed as an industrial hub in the coming years. Investment in residential and commercial projects in the area will reap high rewards for investors in the next few years.